You are here: Home > Marching towards immersion 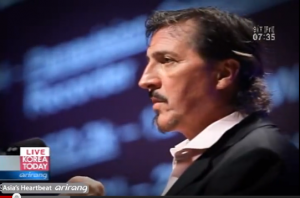 My biz partner Tim McGovern speaks in public often but his keynote for the Dicon 2012 International Digital Content Conference in Seoul, Korea last week was especially interesting to me.

It’s title – New Digital Paradigms in Motion Picture Production and the Effect of High Frame Rates on Visual Effects Production – sounds like one of those film school courses that you wish you could remember the name of.

But…Tim’s address was about filmmaking’s relentless march toward becoming completely immersive for audiences. And THAT is an interesting subject.

Someday, movies are going to be some version of what the novelist William Gibson called “simulated stimulation”.

Someday, filmmakers will be able to entirely fill all of an audience member’s brain with the sights and sounds of their choosing. 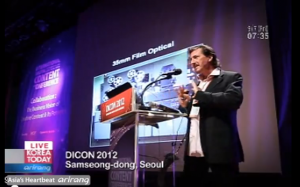 That’s a pretty big idea and an awesome opportunity (and responsibility) for filmmakers.

Haven’t found video of Tim’s entire presentation but here’s a link to a news story about it that aired on Korean TV.

View all posts by George Merkert →
← His Place in the Universe
Will we get all the way from Clark Gable to fully immersive entertainment? →