You are here: Home > Meeting Dr. Who at UTA

Meeting Dr. Who at UTA 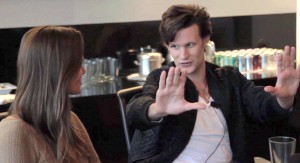 Last Monday, my biz partner Tim McGovern and I found ourselves in a conference room at United Talent Agency with Matt Smith, the current Doctor Who.

We have been working a lot with Tom Trenker of FilmAngels in recent weeks. Tom arranged for us to make a presentation right after a pitch by Matt, Lloyd Silverman and Heather Rae. They’re producing an independent film called My Golden Year.

While I watched Matt, a man of tremendous wit and charm, explain his thoughts about his role in My Golden Year to local investors and a video camera, I wondered how Lloyd and Heather had convinced an actor who packs so much heat to take a role in their low-budget independent film.

Matt told a story about how he had just come from Comic-Con in San Diego where people went so crazy for him that he said he now knows what it feels like to be a rock star.

At first, I thought that Heather and Lloyd had just been lucky to have attracted Matt to their movie before he got as hot as he is at the moment.

Then, after listening to some banter between Matt and Heather, I learned that Matt wasn’t the only candidate to star in their film. Hot as he is, Matt still had to compete with other actors for the role in Heather and Lloyd’s small movie.

Maybe they got a little lucky too but, at base, Heather and Lloyd did what all smart producers do for their films. They dug deep and took risks to capture magic for My Golden Year. Heather and Lloyd were willing to risk alienating even someone who brings as much heat as Matt Smith does by interviewing other actors besides him in hope of finding the right actor for their movie.

Looks to me like everyone made the right choices.

Here’s a photo of Matt and Lloyd talking about their movie.